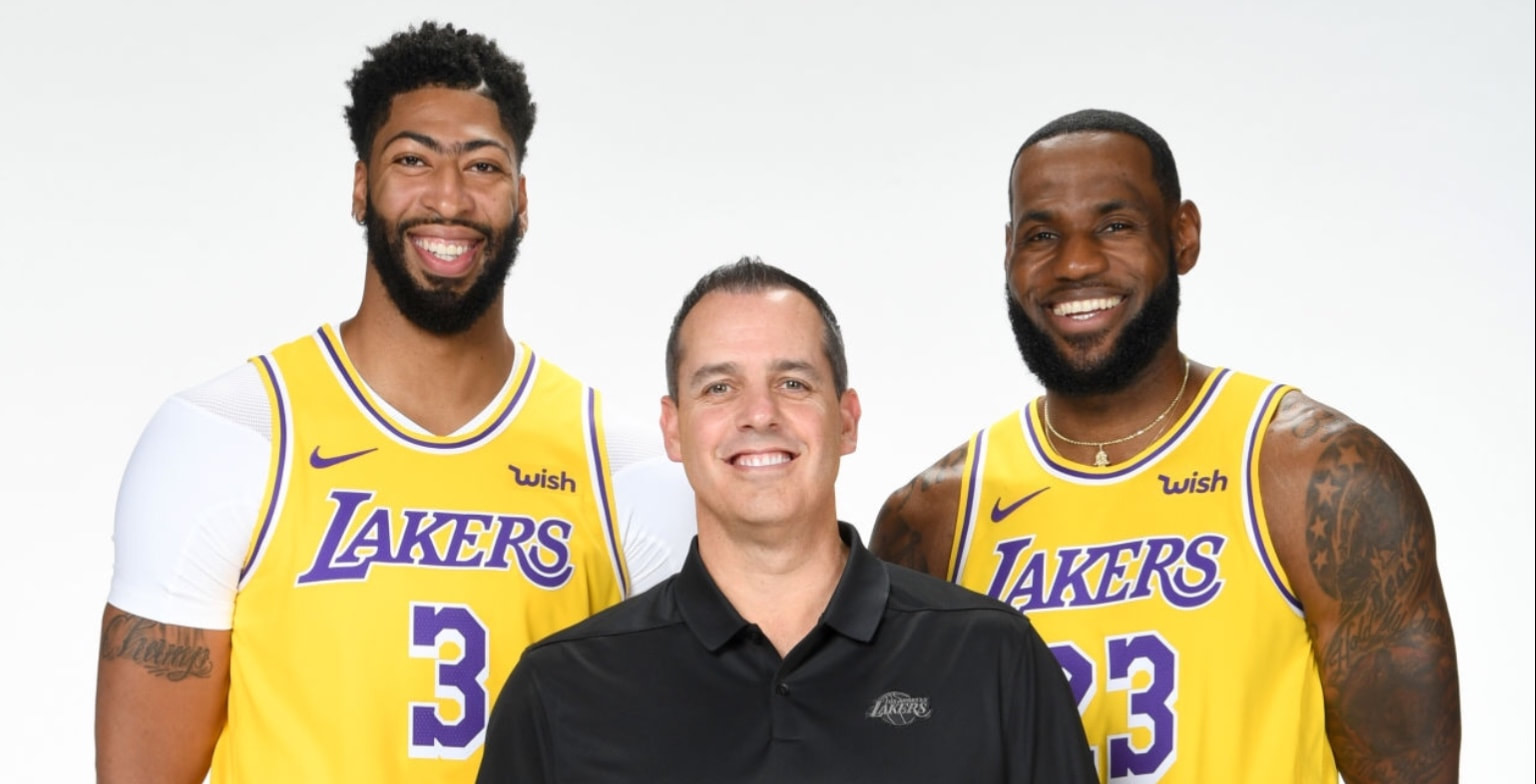 ​The Lakers' training camp has concluded, as the team is making the trip up the coast to the new Chase Center to face the Golden State Warriors this Saturday at 5:00pm pacific time, 8:00pm eastern time.

As we are inching closer and closer to the season, I wanted to cover the biggest things to look forward to this upcoming season, mainly focusing on how our biggest frustrations last season have, on paper, been attended to.

3: Before the start of last season, Luke Walton's job security was already in question. And after LeBron's injury on Christmas Day and the increased losses following, Luke's job security only got more unstable. And that wasn't all, arguably the worst part was Luke Walton's horrible on-court coaching. When a player would get hot, he'd pull them, he'd call timeouts when the Lakers have momentum and not call timeouts when the Lakers desperately needed one. This made it incredibly frustrating to watch. A lot of this was due to Walton's lack of Head Coach experience. He's not a bad head coach, he just doesn't fit with the Lakers' timeline.

This offseason, the Lakers got rid of Luke Walton and his coaching staff, stripping it down to the bone. The Lakers' front office hired a defensive specialist in Frank Vogel and a very experienced staff around him. We should see a substantial improvement in that department, which should make for some more enjoyable basketball.

2: Last year, the Lakers ranked 29th in three point shooting. While it was more of a roster construction issue than anything else, it was still painful to watch. In a league where the three point shot is vital to a teams’ success, not having that was detrimental to our success. Defense was another one of the Lakers’ downfalls last season after the injury of Lonzo Ball in mid-January.

These two things were one of the most frustrating things of last season. The Lakers have filled in these two holes. Virtually everyone the Lakers signed this offseason can shoot the three ball and play defense or at least by in to the system. This season should be a drastic improvement in both of those categories, making it a very exciting aspect of this upcoming season.

1: Last year, the Lakers were in the middle of 'win-now' mode and 'build for the future' mode, and the young guys' timeline didn't match up with LeBron's at all, which made it difficult to put reach the roster's full potential. Looking back on it, it was frustrating being in the middle.

This year, man oh man, 'win-now' mode is a full-go and the Lakers are legitimate contenders for the first time since 2011. They have the best duo in the league, in LeBron James and Anthony Davis, and a roster that looks like it fits around them perfectly.

Lakers fans, we are almost there! As I'm writing this, we have just under two days until Lakers basketball returns and I couldn't be more excited.

​The Lakers' media day took place on Friday, September 27th, where us fans were given our first look at the new faces in their new threads.

Frank Vogel was asked, on the 2nd day of Training Camp, if there were any decisions made regarding the starting lineup:

Avery Bradley at Point Guard: LeBron doesn’t need a point guard that pounds the ball, or one that doesn’t play defense. Avery Bradley brings defense and 3-pt shooting without the need to have the ball in his hands, making him a great fit next to LeBron.

Danny Green at Shooting Guard: He’s easily the best shooting guard on this roster and he’s an experienced 3 and D guy who can space the floor next to LeBron and AD.

LeBron at Small Forward: Not much to say here, it’s LeBron James. The only thing I need to clarify is that LeBron is most likely not going to start at PG, he’ll be the main ball handler like always, but he’s going to play his natural position.

Anthony Davis at Power Forward: Again, not much to say here other than that he’s at PF. I think by the end of games and especially the playoffs, we’ll see more of AD at center, he just doesn’t want to bang with centers all year.

Javale McGee at Center: I think at least to start the season Javale should start over Dwight, just from an ego standpoint, we want to start Dwight off with a very minimal role and gradually increase it if he performs well in order to prevent him from getting ahead of himself.

That's just my thoughts on the starting lineup, be sure to DM me yours and we can talk about it. Only 6 days until preseason and 23 until the regular season! We are almost there Lakers fans! 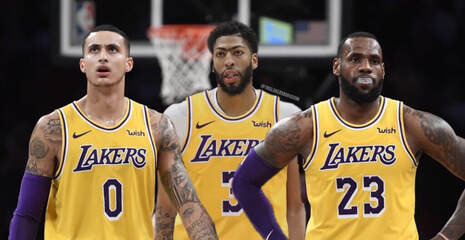 8/13/19: What Seems Like an Easy Start for the Lakers' Season may mask an otherwise expected Slow Start.

Lakers fans have grown eager for the season to start with exciting matchups announced, like the Clippers on October 22nd for opening night and a rematch on Christmas Day.

Unlike the NFL, in the NBA you play the same teams the same amount of times each year. Despite that, the difficulty of an NBA schedule still may vary depending on who you play when. For the Lakers, they have a rather easy first and last 15 games.

The sub-par competition in the first stretch of the Lakers’ schedule will help the team’s chemistry develop and mask the slow start the LeBron-led Lakers might have had otherwise.

Lakers fans, we only have to wait 53 more days to see some Lakers basketball when the preseason tips off on October 5th vs the Warriors in the new Chase Center. 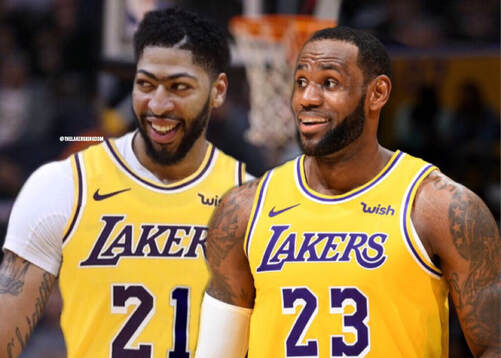 6/14/19: The Western Conference is Wide Open Next Season, and the Lakers Need to Take Advantage of it.

Last night, the Toronto Raptors took down the extremely short-handed Warriors. In the third quarter of last night's game, with 2:22 remaining, Klay Thompson tore his ACL on a fastbreak. In game 5, Kevin Durant came back from his calf strain and on a drive to the basket tore his achilles. The Warriors were plagued with injuries during the playoffs, which is what ultimately led to their Finals' loss Prayers up for a speedy recovery for Thompson and Durant.

With the Warriors being so short-handed next year, anyone could come out of the West. The Lakers need to take advantage of this.

Now don't get me wrong, I love the young core. All of em, Ingram, Kuzma, Zo and Hart. And up until this point, I have been a huge proponent of keeping the young core. But the Lakers need to close out this Anthony Davis deal. Yes, we don't want to give up too much, and yes I would love to keep at least one of the guys in the young core, but this is a one time opportunity, the West is open, and we need to sit on that throne once again.

A combination of LeBron James and Anthony Davis not only would give us a better chance at winning a championship and would also certainly be more attractive to Free Agents this summer than without him.

​Rumors and news have been slow in the past 24 hours, which could mean either that the framework of the deal is agreed upon, they are just working out the specifics of the trade or the trade negotiations have slowed down. Hopefully, we get some more information later today, but all we can do is wait. 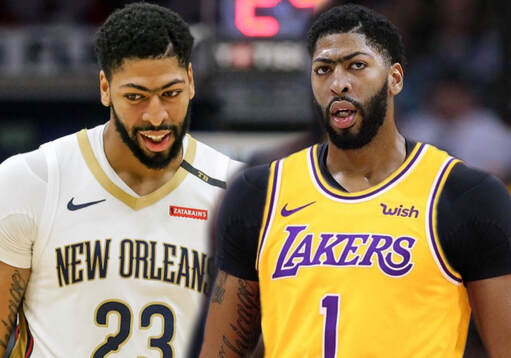 6/13/19: Anthony Davis to the Los Angeles Lakers is looking more likely by the minute.

This afternoon, Adrian Wojnarowski of ESPN, reported that the Celtics and Lakers have both discussed an Anthony Davis trade with the New Orleans Pelicans. Mark Stein of the New York Times tweeted:

"The Lakers have made Brandon Ingram, Lonzo Ball and the No. 4 pick in the June 20 draft available in trade talks with the Pelicans, league sources say. New Orleans has made it known it hope to assemble a three-teams-or-more deal before surrendering Anthony Davis".

​It was also reported by Tania Ganguli of the LA times that the Lakers are trying to keep Kyle Kuzma even though the Pelicans need him in the deal in order to complete it.

In my opinion, this is an awful trade. The Lakers need to try and keep either Lonzo Ball of Brandon Ingram. The Lakers have shown that they really are going to prioritize defense in this coming season, yet they are trying to trade the two best defenders on the team. The front office is showing to me that they only care about scoring more than every other aspect of the game.

​From this point and from what we've offered already, I don't see a way of us keeping Lonzo Ball or Brandon Ingram. The only way I will ever think of this deal as a good one is if we sign a max Free Agent this summer because we have Anthony Davis. Otherwise, trading Lonzo Ball, Brandon Ingram, and possibly Kyle Kuzma is a huge mistake.

​And now we wait. A deal should get done in the next couple days (just speculation). Nothing we can do at this point except watch. Let's hope the Lakers make the right move. 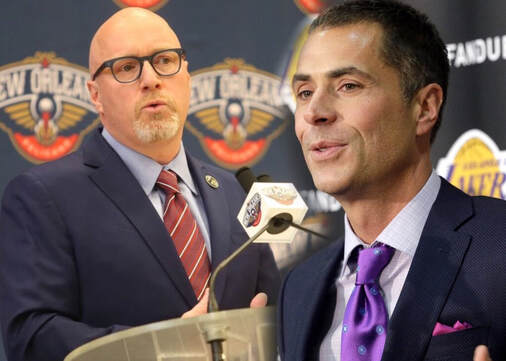 6/10/19: New Anthony Davis Trade Information and What I Would Offer If I Were GM:

​Today, Adrian Wojnarowski of ESPN reported that David Griffin and the New Orleans Pelicans would want an All-Star player, a young player with All-Star potential and 2 First Round picks in exchange for superstar big man Anthony Davis. He also reported that the teams that have inquired about a trade involving Anthony Davis are the Lakers, Clippers, Nets and Knicks. The Pelicans are also looking for a 3-team deal to bring in more assets and would prefer that a deal be done by the NBA Draft on June 20th. Shams Charania of The Athletic also reported that Anthony Davis's preferred long-term destinations are the Lakers and the Knicks.

If I were GM, my max offer would be Kyle Kuzma, Lonzo Ball, Josh Hart, Moe Wagner, the 4th pick in the 2019 NBA Draft and a 2021 First Round Pick. Giving up more than that and including Brandon Ingram would defeat the purpose of tanking for the past 6 years and would leave us with just LeBron James, Anthony Davis, and the shot at getting a max Free Agent this summer. Our bench would be extremely thin, which would make it very hard to win playoff games.

​With that said, if we somehow know that a max Free Agent is coming in the summer then we should consider sending Kyle Kuzma, Lonzo Ball, and Brandon Ingram out for Anthony Davis. But there’s no telling for sure where someone is going in Free Agency and anything could happen from now until June 30th when Free Agency starts. Otherwise, I don’t believe that trading those three young guys is worth it.

​Buckle up Lakers fans, this next week and a half is going to be filled with new information and more than likely Anthony Davis on a new team.